EDI ranks number 1 out of 7 driving schools in Dubai with 6 stars services! 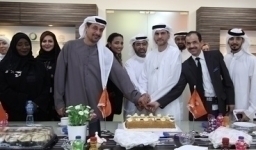 Emirates Driving Institute (EDI), the UAE’s largest and most successful Driving Institute, has ranked number 1 out of 7 driving schools in Dubai by Roads and Transport Authority (RTA) with 6 and 7 stars across its 3 main centres in Dubai (Al Qusais, Al Quoz and Port Rashid).

EDI is proud of this achievement having held the number 1 position consistently over the last 3 quarters of the PRM Audit conducted by the RTA, which continues to encourage its service providers to achieve the best results.

With over 25 years of experience delivering quality driver training, EDI recognises and celebrates the role played by staff members across the 3 centres in their dedication to hard work, great effort as well as responsiveness to the RTA.

Emirates Driving Institute is honoured by the prestigious 7-Star rating awarded by the Roads and Transport Authority to the Al Quoz Branch in the last Quarter, and is grateful for the support of RTA and their provision of this framework.

Speaking of the achievement, Mr Abdulbasit Al Suwaidi, CEO – Transport & Commercial, Emirates Driving Institute, said: “To receive a 7-star rating by RTA is indeed a matter of great pride for us. The ratings are a strong reiteration of our commitment to creating safer drivers by providing services of highest international standard. It is also a reward for all our staff members who have successfully contributed over the years to create brand ‘EDI’.”

EDI enjoys a reputation as the leading learner and driver training organisation in the Middle East, and this is further strengthened by the ratings which rank EDI number 1 out of 7 driving schools in Dubai.

Ratings assessed by the RTA were based on a range of KPIs at which EDI scored top place overall for its 3 main centres including Core Service Delivery, Customer Journey, Compliance and Passing Rate, with the passing rate at the 3 centres being overall 94%.