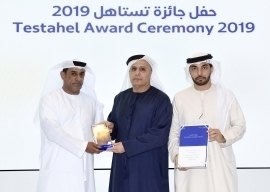 EDI wins the RTA Tastahel Award 2019 for the Supplier for Driver Training & Licensing Services category during Happiness Week on Mar 21, 2019.

Testahel Awards were held together with the Happiness Week by RTA for its seventh consecutive year. The awards ceremony was attended by a host of CEOs, Directors, and employees of RTA as well as representatives of winning companies at the RTA headquarters in Dubai. In line with the National Agenda for Happiness & the Dubai Plan 2021, RTA has included ‘People Happiness’ within its strategic objectives. RTA is always keen on boosting customer communication by providing them with valuable feedback whilst addressing their needs on various services & projects